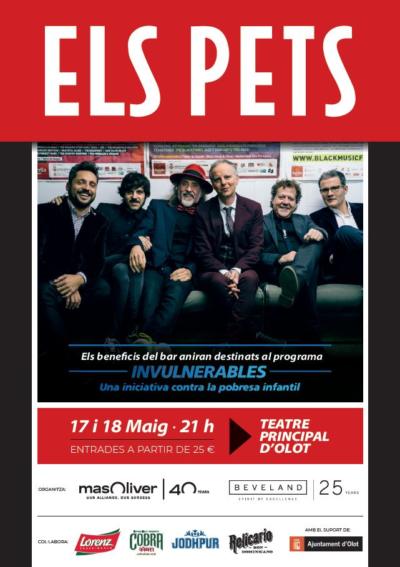 Masoliver is celebrating its 40th birthday and Beveland its 25th birthday this year. The two companies have organized solidarity concerts on two evenings in Olot, both involving Els Pets. On 17 and 18 May the Constantí group will present SOM, their latest album, at the Teatre Principal in Olot. Tickets for the concerts, which have received the support of the Town Hall, can be purchased via the usual Olot Cultura sales channels or in person at the Can Trincheria office and the theatre’s box office.

Five years after their last studio work, Els Pets have returned to the stage with renewed forces with a new album: SOM. With a precise scenography and staging, they’re presenting their new album on a tour which has, to date, sold out at all the venues they’ve performed at.

The money raised will go to the #Invulnerables programme to combat poverty. This initiative strives to ensure that all children and their families have the same opportunities, regardless of their origin. The aim is to halt the circle of poverty handed down from generation to generation by means of a basic tool: education.

Go back to news